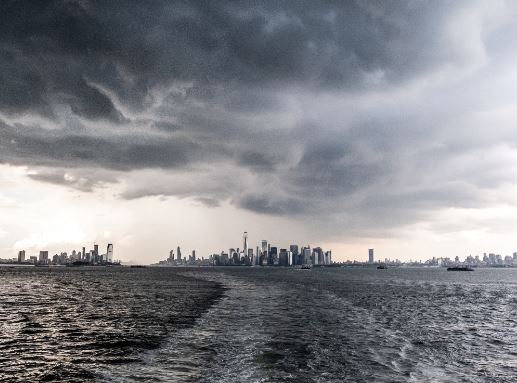 If you thought 2020 was a difficult year, what with the pandemic, the near market meltdown in March and the rush to get everyone working from home, you might want to snatch some rest where you can. Michael Cembalest, the chairman of Market and Investment Strategy for J.P. Morgan Asset Management, has today updated his 2019 appraisal of the 'Armageddonists,' and he suggests that the financial apocalypse could yet happen...in early January 2021.

Cembalist's original Armageddonist piece looked at fund managers like Carl Icahn, George Soros, and Paul Krugman whose comments fuel bearish markets, and at the opportunity cost of being an investor responding to their prognosis. Human beings have a negativity bias, said Cembalist: they prioritize negative news.

One year on, Cembalist notes that markets haven't crashed and that the Armageddonist fund managers still haven't had their predictions come to fruition. It helps that debt monetization in response to the global virus crisis (GVC) has occurred at a rate never seen before (see the chart below). "COVID stimulus was 2x the levels provided during the Financial Crisis, and was delivered 4x faster," says Cembalist. A technical shortage in U.S. publicly traded equities after M&A activity and buybacks outweighed primary and secondary issuance, helped equity markets too. 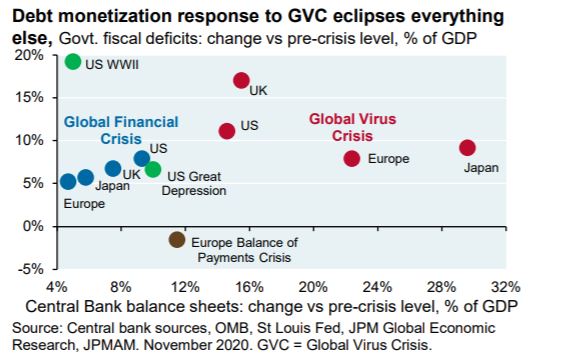 While the Armageddonists' failure to call the market correctly in the past might not be auspicious for the future, Cembalist does however suggest there's a way that their wish could be granted: a U.S. constitutional crisis on January 6 2021.

He outlines a scenario in which this could happen. Firstly, state legislatures could conceivably submit a slate of electors that runs contrary to the popular vote, citing Article II of the Constitution (this is extremely rare and most recently happened in Hawaii in 1960).

These competing slates would then be dealt with by rules spelled out in the Electoral Count Act (ECA) of 1887. These rules state that the newly seated Congress would need to resolve the competing slates on Jan 6. If Congress, were split, ECA tiebreaker rules would probably require Congress to adopt whichever slate was signed by the Governor of the state in question. Cembalist notes that this means Democratic governors in Michigan, Pennsylvania, Wisconsin and Nevada, and Republicans governors in Georgia and Arizona.

Cembalist then outlines the "nightmare scenario" envisaged by historian Graham Allison, who says the GOP could declare the ECA unconstitutional on the grounds that federal statutes can't constrain the power of Congress to count and determine validity of electoral votes.  "If the House and Senate disagree on competing slates, VP Pence (as presiding officer of the joint session of Congress in which electoral votes are counted) could cast the deciding vote," says Cembalist. Armageddon is reached if, "the ECA is jettisoned by the Senate, the GOP declares Trump as the victor by flipping 3 states, Democrats disagree and refuse to participate in the Jan 6th session, all of which sets up the prospect of dueling inaugurations."

While none of this may seem likely, Cembalist notes that the Senate's composition on Jan 6 will be 51-R and 48-D. Therefore, if competing slates are submitted and if two or more GOP senators respect the ECA, gubernatorial tie breakers could be evoked and the situation could unfold.

Cembalist suggests a few other sources of potential concern. - In Michigan, if the state canvassing board doesn't certify the popular vote, the decision appears to be thrown to the state legislature, which could lead to the decision being made by the courts. Alternatively, the Attorney General could impound election results and slow counts, preventing a state from meeting the December14 Electoral College deadline.

"A LOT of very unorthodox things have to happen for Trump to be re-elected," says Cembalist. Trump would need to reverse or impede Biden's win in three states. "Even so, I’m not ruling anything out," he adds, noting that Trump just fired the top U.S. election security official, is petitioning judges to prevent state certification of results due to fraud and other improper conduct, and that the Attorney General has authorized the Justice Department to investigate voter fraud....

In the event that the situation hasn't been resolved by Jan 6, Cembalist says markets might "react negatively" as, "the world’s reserve currency nation is seen as sliding down a path toward electoral illegitimacy." January could therefore be just as exhausting as 2020 - if not worse.

If the opportunity to rest arises over Thanksgiving and the festive holiday, you therefore might want to take it. - Unless, like Cembalist, you have a relative who believes that the election was hacked and demands that you waste hours attempting to refute them.

Photo by Clément Falize on Unsplash