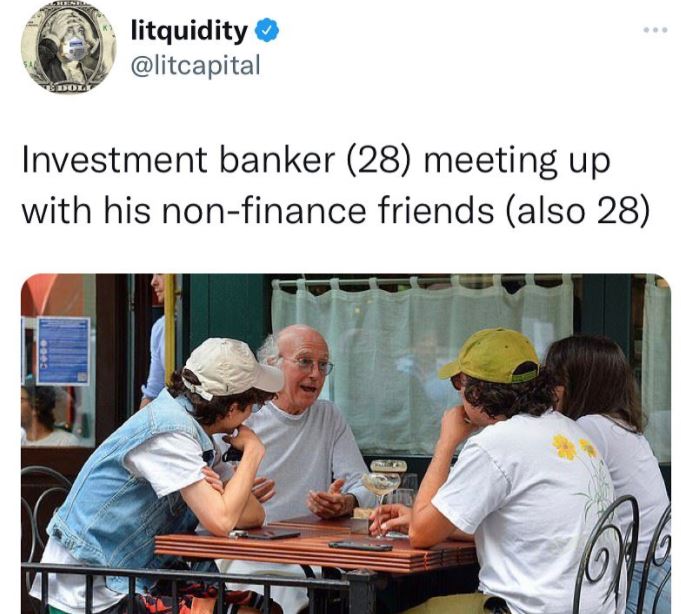 The last year has been all about meme stocks like Gamestop and AMC, but is it possible to have an entire banking career based on meme humour?  It seems like Mark Moran, formerly of Centerview Partners, is going to try to find out.  He’s been recruited to be the public face of Litquidity, an Instagram account which “satirizes the financial industry via memes on social media”, but which also occasionally seems to get tips about important stories, particularly relating to junior bankers’ pay.

Moran came to prominence after leaving Centerview in order to appear on a reality TV dating show entitled “FBoy Island”, in which he mainly hung around with his shirt off in the Cayman Islands.  Now he’s “Head of Growth and Operations” for an anonymous former private equity banker with an Instagram account that posts stills from TV programs with captions about MDs making you work the weekend.  Litquidity is apparently planning to launch a podcast called “Big Swinging Decks” soon, and is in talks to raise funding in order to buy a new joke.

It seems like quite a left turn on a career path which apparently had Mr Moran earning $400k in 2020 as an associate at Centerview (this was in 2020, when the base salary was just $125,000).  There is money in memes – Litquidity itself makes revenues of $1m a year from its 601k followers at present, which would put it pretty high up the influencer league tables – but it’s clear that he’s taking a substantial pay cut.

Obviously, people leave banking for all sorts of reasons.  Centerview is not quite as gruelling as Qatalyst or Moelis, according to the Wall Street Oasis survey, but with average working hours at 75.9 per week, it’s understandable that Mark might not want to leave all of his torso-bearing years behind in a conference room.  And who knows, maybe he’s more in tune with the future than we might think?

He seems to have made up his mind to head in the direction of new media a while ago.  According to the AMA he did for fans of F-Boy Island, his ambition is to “pursue a career in financial broadcast journalism, using my background as a banker and lawyer coupled with this experience to hopefully create a show that bridges the worlds of traditional finance / Wall St and r/wallstreetbets”.

That’s not a million miles away from the career path of Matt Levine or Joe Wiesenthal at Bloomberg, both of whom began as bloggers with a finance background and ended up as big swingers on the journalism circuit.

Elsewhere, trading floors are beginning to fill back up in London and New York, but some sales and trading staff are still hoping to enjoy the benefits of working remotely a couple of days a week.  Now that the crisis phase of the pandemic is over, the regulators are beginning to think a little more seriously about what that might imply.  In particular, the UK FCA is taking the view that if you’re doing work somewhere, it’s a workplace, and that means that they can come in and inspect it.

Spare bedroom, kitchen table, shed; wherever you put up your screen, a regulator can come in to check whether your environment could pose a risk of financial crime or anti-competitive behaviour.  And they don’t need to be carrying out an investigation either.  They could just make an unannounced spot visit as part of ongoing supervision.

It’s not clear whether this is a realistic prospect, or what the supervisors might be worrying about – the banks themselves have expressed concerns over house-sharing situations where junior employees from different banks might be sharing a wifi connection or a living room.  But it’s entirely possible that a few home visits will be made, just to demonstrate they’ve got the power.  This could also make an excellent basis for memes in the future.

“Charging us for dinner before we know if we’re getting hot dogs or caviar”.  Mike Mayo, the veteran bank analyst and long term Citi critic, is not a fan of the new compensation program there.It could pay out as much as $5m to Mark Mason, Paco Ybarra and Mike Whitaker – basically the C-Suite excluding CEO Jane Fraser – for completing a program to transform internal controls, but there doesn’t seem to be much explanation of what would constitute a success. (Bloomberg)

The Duke and Duchess of Sussex (Prince Harry and Meghan Markle, that is) are going into “partnership” with Ethic, an ESG investing fintech.  It’s not clear what the partnership involves – probably more likely to be a promotional role than actually picking the stocks.  (NYT)

If you want to start a cult-like wellness brand based around your unique personal story as a former banker, here’s a how-to guide.  It has useful tips like “don’t post pictures of charcuterie if you’re selling vegan cosmetics”. (Inc)

According to Jes Staley, Barclays “doesn’t have any problem” in the talent war for investment bankers, but “my worry is the war for engineers”.  A new campus in Glasgow has room for 5,000 techies, with a street food market and other amenities.  Glasgow has the highest proportion of female managers in Barclays’ network, partly because short commute times there work well with childcare. (Reuters)

UBS is setting up a new “AI, Data and Analytics” team reporting in to investment bank head Rob Karofsky.  The existing “Group Research, Analytics and Commuincations” team is being moved back into the investment bank and its head, Juan-Luis Perez will be leaving.  It seems from the news report that the emphasis is now being placed more on AI as a way of cutting costs and improving efficiency internally, rather than getting an edge on markets. (Bloomberg)