Welcome to the new secular growth market for banking jobs 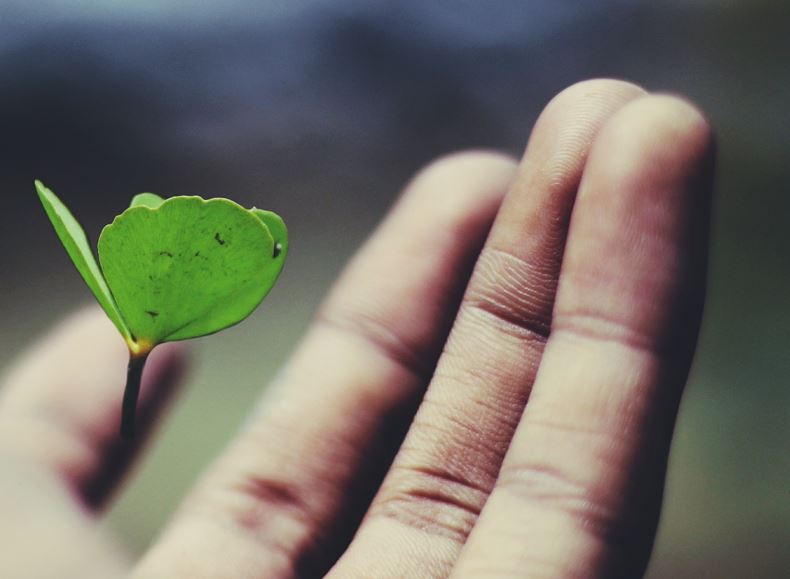 If you've built a front office investment banking career in the past decade, congratulations. It hasn't been an entirely easy time; figures from research firm Coalition indicate that headcount across banks' trading and investment banking divisions has fallen more than 17% since 2013, with fixed income trader taking the worst hit.

With luck, however, things could have changed. After cutting headcount to the bone ten years ago, there are signs that banks may need to run fatter in the future.

This is already apparent in investment banking divisions, where a combination of complaints from burned out juniors and an exceptional year for deal-making is driving the sort of hiring that hasn't been seen since the dot com boom. Junior banker hiring may, of course, drop back later when deal pipelines subside, but there's no sign of this for the moment and vocal complaints about 100 hour weeks mean banks may always need more analysts and associates for any given volume of deals from now on.

"There's been a lot of pent-up hiring that didn't happen during 2020 because of COVID," says one credit headhunter and former trader, based in London. "Most banks were running very lean on staff, and the thinking around this is starting to change."

Between 2013 and 2021, front office fixed income sales and trading headcount went from 21,300 to 16,300 by Coalition's reckoning - a drop of 5,000 people. This was partly down to the electronification of fixed income markets and the fact that fewer people were needed to manage electronic systems. It coincided, too, with comparatively weak revenues, and comparatively easy market conditions.

The chart below, from JPMorgan's banking analysts, reflects the lull. In fixed income sales and trading, revenue began slumping in 2012 and recovered only last year. In equities sales and trading, a smaller slump began in 2015. In investment banking divisions, revenues plateaued between 2014 and 2019. 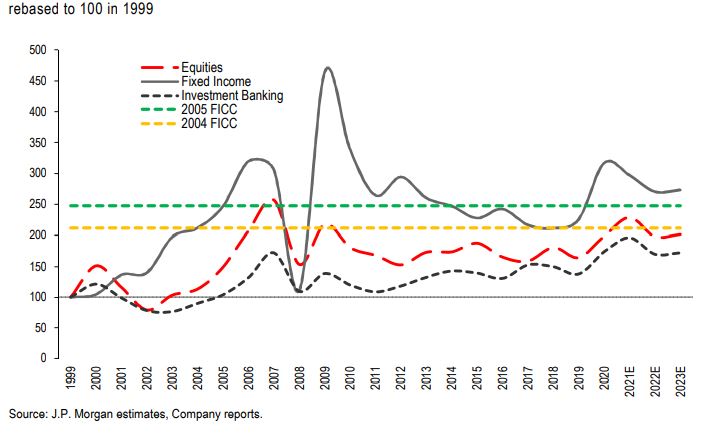 2020 was clearly an exceptional year, but if you work in the front office and are wondering what happens next, JPMorgan's chart is informative: even after we pass the peak of 2020 (or 2021 in investment banking divisions), JPM's banking analysts think revenues will remain above their level during the years preceding 2019. It's a view shared by Daniel Pinto, CEO of JPMorgan's corporate and investment bank.  “You’re going to have, over time, an increasing wallet,” he said earlier this month. “From here you would expect that as the world grows and capital markets grow, the trading businesses will grow”.

This should help keep hiring and headcount up. It looks like good news for markets professionals, irrespective of this year's dramatic fall in fixed income revenues versus 2020. Equally importantly, though, fixed income headhunters suggest the additional complexity of an inflationary market and an environment where rates seem likely to tighten means banks will be less willing to run ultra-lean teams than previously.  "Hiring plans reflect long term market conditions instead of short term revenues," says a senior fixed income headhunter in London. "You need to hire as many people to manage a difficult market as a profitable market." Russell Clarke at Figtree Search says bans are hiring with an eye to the next 18 months: "We are looking at a bounce back, inflation and fiscal spending. Great for the rates and credit markets"

Away from the rush to fill junior investment banking roles, headhunters say the big hiring story this year has been frantic competition for staff to fill niche roles like those trading British, Canadian and U.S. government bonds. As rates rise, larger teams may be needed in future. "Since 2008, you've had a long period where nothing much happened with rates, and you could manage the front end of the curve very easily," says another trader-turned headhunter. "Once rates start rising, the front end becomes more interesting and there will likely be more need for staff in that context."

"Markets are simply going to be more difficult," reflects a credit headhunter. Teams that have been running on empty will need a rethink, he says - especially if clients want human beings to help them navigate. The long term trend for sales and trading teams is pointing towards expansion, at least until mid-2022.

This doesn't exclude short term hiccoughs. The third quarter of 2021 is proving challenging for many fixed income desks, and some headhunters say there's already a softening of hiring enthusiasm versus the start of the year. The fact that it's summer doesn't help. "Some of the hiring seems to be running out of steam a bit," says the head of one fixed income search firm who operates in London and on Wall Street. "There's not quite the same conviction that the pandemic is over as there was at the start of this year."

Photo by Ravi Roshan on Unsplash