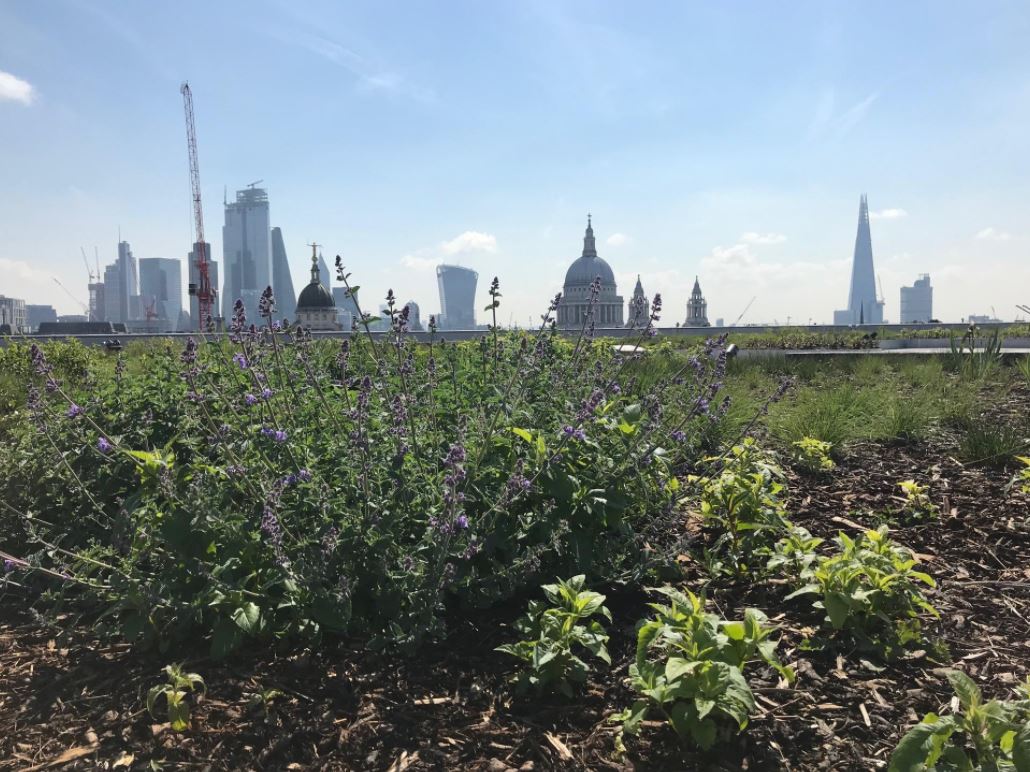 The Goldman Sachs roof garden in its early days

Once upon a time, people working for Goldman Sachs' new office in London ate their food in a large room looking a bit like a cross between a school assembly hall and a conference venue, where there was sometimes an aroma of fish and chips. Thanks to the pandemic, they've branched out a bit.

Most banks have eating areas reserved for clients and managing directors. At Rothschild, for example, there are butlers and a fully stocked pantry for the executive dining rooms. At Goldman Sachs' London office, the landscaped roof garden with its habitat boxes and rainwater collection facilities were once reserved for senior staff and clients who wanted to eat al fresco, but the firm has seemingly democratized their access: nowadays, anyone who wants to eat their food on the roof is free to do so.

Bloomberg says it's all part of a campaign to entice bankers back to the office. Alongside the outdoors eating, Goldman has reportedly begun offering its London people free breakfasts and lunches alongside their free ice cream. Food at Goldman was always subsidized - in 2016 Business Insider discovered you could buy a sausage there for 55p; now it costs nothing whatsoever.

In offering free meals and locational perks, banks have crossed into the domain of large technology companies, which have always gone big on non-monetary benefits. Banks, by comparison, preferred to pay well and to spend any extra money on paying even better. The need to persuade people back to the office appears to have brought a new way of thinking which suggests that money is not the only incentive.

Separately, when bankers travel for business, it's not entirely for the good of the client. The Financial Times reports on a survey that discovered 96% of people are willing to get back to business travel and that 65% are "very willing" to do so. However, their impetus for flying about again isn't simply pressing the client flesh: 54% wanted to make connections with clients, but 52% simply wanted to “experience new places”. Another 41% were mostly keen on “taking a break from their everyday life”; 19% just wanted to dress up and go out somewhere.

In May, JPMorgan told its vaccinated bankers they didn't need to wear masks in the office. Last Friday it reversed this because of the Delta variant. (Bloomberg)

Concerns about the Delta variant mean that BlackRock staff will now be coming back to the office in October instead of September. (Financial News)

“Firms over the course of the past year are recognizing more and more that you’re better off having two or three analysts with extra bandwidth for projects than one analyst who is working 16 hours a day, seven days a week.” (Bloomberg)

ARK fund manager Cathie Wood says she was an "odd duck" when she worked for Alliance Bernstein. She's staffed her own firm not with finance types but with people who have experience in the technology industry areas she's investing in. (WSJ)

If you failed the CFA you should probably take it again. “All things being equal, someone with a CFA would have an edge over another candidate and someone without a CFA."  (Financial News)

Pandemic delays mean that green card applications in the U.S. which previously took two months are now taking 10.5 months, or - in the worst cases - up to five years. There's a huge backlog and this is punishing Indian immigrants and quants working on Wall Street. Limits on the number of applicants from each country who are offered a green card in each year means that Indians whose applications weren't processed last year or this year might not get processed next year either. “It’s dehumanizing, because you’re somehow less than an equally qualified person who happens to be born in a different country.” (WSJ)

Law school is no guarantee of riches. Graduates are leaving with $250k of debt and starting jobs as public defenders on $45k. “I had no work experience, life experience, anything like that before I signed on to this quarter-million-dollar loan...I thought I would come out making much more than I did.”  (WSJ)

JPMorgan has been given permission to take full control of a securities business in China. (WSJ)

Jamie Dimon thinks the ski season will be great this year. “I think you’re going to be very healthy. My guess is it will be better than you’ve ever seen it." (Park Record)